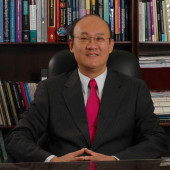 Trained by the best…

An internationally acclaimed infertility expert and a pioneer in the simplification of in vitro fertilization (IVF), Dr. Tan was trained and mentored in London by Professor Robert Edwards, the inventor of IVF and recipient of the 2010 Nobel Laureate in Medicine.

In true prodigy fashion, a young Seang Lin earned the Howard Eddey Gold Medal for surgery at the Royal Australasian College of Surgeons in 1980. In 1983, he received the prestigious MRCOG Gold Medal from the Royal College of Obstetricians and Gynaecologists in the U.K.  A few years later, Professors Edwards, Jacobs, Campbell and Tan co-founded the London Women’s Clinic with Dr. Tan as the Medical Director.

…to be the best

Professor Tan is internationally renowned and travels the world seeking out the latest innovations. He returns to Montreal to introduce these state-of-the-art technologies to help his patients create their families. It is his passion to bring his patients the best in the world…right here, right now.

From December 1994 to May 2010, Dr. Tan served three terms as McGill University Chair of Obstetrics and Gynecology. During his tenure, he created eight fellowships and established the Women’s Health Mission at the MUHC. He also facilitated the creation of the Milton Leong Chair in Reproductive Medicine, the Richard Cruess Chair in Reproductive Biology and the Robert Kinch Chair in Women’s Health, with large personal donations to each of these chairs.

Among many national and international firsts, Dr. Tan’s most noteworthy accomplishments include:

In recognition of his significant contribution to the field of obstetrics and gynaecology, Dr. Tan has been awarded:

Dr. Tan has authored leading landmark research that has been published in Nature, The New England Journal of Medicine and The Lancet and has served as:

In 1996, Dr. Tan took his vision and passion for advancing reproductive medicine to a whole new level by founding the McGill Reproductive Centre (MRC). Here, he introduced state-of-the-art technologies from all over the world to his loyal patient base.

In August 2010, he took the next natural step and founded the Montreal Reproductive Centre which evolved into the OriginElle Fertility Clinic & Women’s Health Centre – a leading-edge centre that aims to combine the clinical and scientific excellence achieved at the McGill Reproductive Centre with the same personalized service provided by Doctors Tan and Edwards at the clinic they founded in London.

At OriginElle, we frequently persevere and are ultimately successful with patients which other clinics have found too challenging or difficult. This is why our doctors have had patients referred to them from leading specialists in Cornell, Harvard, Stanford, Oxford and London teaching hospitals. We are multi-cultural, speaking numerous languages for the comfort, support and wellbeing of our patients. In addition to French and English, we speak Cantonese, Mandarin, Italian, Spanish, Greek, Russian and Bengali.

Because of his inimitable and resounding success throughout the years, thousands of parents will be forever indebted to Dr. Tan for his assistance in helping them to create their families.