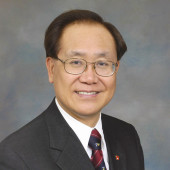 Dr. Andrew Mok is the Clinical Director of OriginElle Fertility Clinic. He is also presently an Associate Obstetrician & Gynecologist and a Clinical Assistant Professor at the Department of Obstetrics and Gynecology at the McGill University Health Centre in Montreal, Quebec, Canada. He has specialized in fertility treatments and reproductive technologies since 1979.

His involvement with Assisted Reproductive Technologies dates back to the mid 1980s. He holds an Honors B. Sc. degree in Biochemistry and he is a graduate from the Faculty of Medicine of McGill University. He received his Reproductive Endocrinology fellowship and post fellowship trainings at the McGill affiliated hospitals.

Dr. Mok’s main interests and expertise include minimal invasive surgeries (MIS), including but not limited to operative resectoscopy, hysteroscopy and video-laparoscopy. He is Board Certified both in the United States and in Canada, and holds membership in numerous medical societies including the Canadian Medical Association, the Quebec Medical Association, the American Society for Reproductive Medicine, the American Society for Reproductive Surgeons and the Royal College of Physicians and Surgeons of Canada.